Tonight we met an extraordinary young man who we as a club decided to award the Good News Award to. Krishiv Khanna, a local Golden Grove boy who for his 11th Birthday forgone presents to raise money for draught-affected farmers. Thanks to the support of his family and his fellow Year 5 Golden Grove Primary classmates he was able to raise $200 which was donated to Buy A Bale Initiative.

In a special twist of tonight’s meeting Krishiv bought along another personal donation PLUS asked that his prize from the GN Award to be also sent to the Draught-Affected Farmers. To say the least we are very proud and 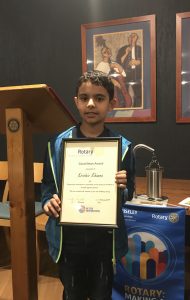 honored to meet such a special young person and his wonderful family.