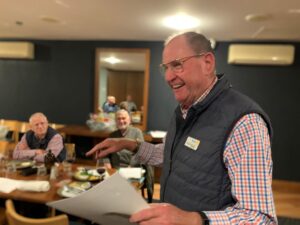 Wayne Stevens JP was born in 1947 here in Adelaide and grew up in the Kilburn area. After leaving school he started work at the Royal Insurance Company, where the “Black Stump”  is now in 1963. At the same time as was common he applied for several other positions including the Commonwealth Bank Australia (CBA).

Starting working in the Motor Insurance Endorsement section of the Royal was particularly boring, however I found two work mates who enjoyed beating me at billiards which saw my income disappear regularly.

Later in 1963 he received a call from the CBA staff department wondering whether he would consider an interview to commence work with them at the Hindmarsh Branch.

He went to the Bordertown Branch as “Teller One” in 1966 and that’s where he became a Jaycees (Junior Chamber International) member and did various volunteer activities over the next few years. From 1969 to 1983 he worked numerous positions at CBA, including the Branch Inspection Team and the Personal Department recruiting for SA, NT and PNG.

In 1996 Wayne saw the restructure of CBA and most National Banks. Area mangers were established and over time these teams grew to encompass business banking, retail lending and financial service staff. In his new expanded role he headed up the region in Eastern Adelaide; then by the year 2000 he was based at the Salisbury Branch and was covering an area that went from Modbury to Broken Hill to Port Lincoln.

During that 10 year period out at Salisbury Wayne won at least 3 Top National Awards.

I was recognised by the Managing Director on three occasions for National Awards, one was several weeks before I commenced chemo at the Central District Hospital in 2001 & 2002.

It was important for Wayne to mention that the North Region also achieved Top Area on 4 occasions over that same period. 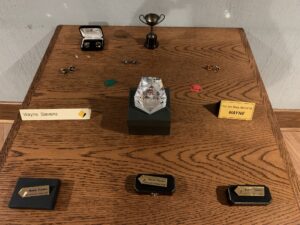 After retiring from CBA in 2010 he commenced as the CEO of the SA Bookmakers League. Wayne has casually worked for the bookmakers over the course of 40 years on Saturdays and Public Holidays. But this only lasted 18 months as managing Bookmakers was very taxing, so then he moved on to other endeavors to keep busy.

Wayne actually obtained a chauffeurs licence but he then secured a casual position as a General Inspector (parking) for Port Adelaide, Gawler and the Marion Council.

A best friend of mine from CBA days was now CEO of Homestart Finance. He suggested I get a “proper job” and I assisted the setting up their Hardship Assessment Program and endeavoring to reduce arrears at that time (this job reduced to filling staff gaps etc.) Later they offered me a more secure role but I was getting too old by then. The enjoyment of being a casual had spoilt me. I finish up there in 2017.

Wayne Stevens joined Rotary in 2013 and is a very active and valued member of the MGG club and we appreciate him sharing his history tonight.