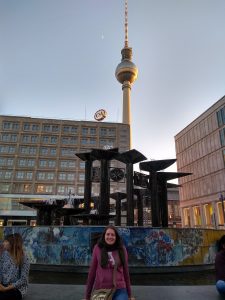 How is everything going downunder?

Everything is great down here in Denmark. My second host family is VERY nice, I moved there a month ago and I also baked a cake for them and my host dad’s parents today. We are having lovely weather down here, nice warm days. Its actually the hottest summer in 400 years so I think either I brought it with me or I’m very lucky. I went to Copenhagen for the first time last Sunday and it was so beautiful. I saw a place called Nyhavn which is a colorful Danish harbor and I took a boat tour with a lovely exchange student friend from New Zealand called Macy.  We also went to the Tivoli carnival that’s near Copenhagen. It was so amazing, there were so many rides. It was almost like a smaller, Danish version of Disneyland with less people and probably better prices. haha.

I’ve been on Eurotour and had the experience of a lifetime. I think Berlin and Prague were my favorite destinations. The Berlin Cathedral is so beautiful!! We also went to Disneyland in Paris. It was definitely one of the highlights of the trip! There were 43 other students on the Euro tour bus and they were all really nice.

Answering your question about the students in class. Yes they are all alright at English. There are a few very good English speakers as well, one of the girls actually went to Australia on some kind of exchange as well which is cool ! One of the other girls also did a similar thing in India ! They are both my tutors actually and they are the best at English in my class I think.