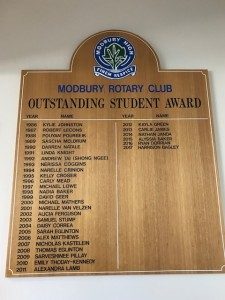 In 1986 it was decided to present a prize to the Year 12 Modbury High School student who was adjudged by the school to be the Outstanding Student of the Year. The award was provided to assist with future education transition expenses at the discretion of the student. The prizewinner is determined by the school and announced at the Annual Prize Giving Assembly and is traditionally presented by the incumbent club president.

In 2001 Mrs Jean Tilley was pleased to agree to our request that henceforth the award be known as The Modbury Rotary/John Tilley Memorial Award to perpetuate the memory of John Tilley, Rotarian and Paul Harris Fellow, former Mayor of the City of Tea Tree Gully (1974–1981, 1982-1989) and dedicated servant to his community. Up to and including the award presented in 2021 there have been 37 presentations. The most recent was to Ashlee McLeod.

This award was first presented in 1986 as a sum of $250. The value of the award has been reviewed and adjusted progressively and now stands at $1,250. The most recent increase in 2015 was to recognise the fiftieth anniversary of the school opening.  Since its inception amounts totalling $29,700 have been made to deserving students.

We look forward each year to supporting and encouraging the staff and students of Modbury High School and share the excitement of the student, parents and staff when the winner’s name is announced. It’s a surprise to us too!