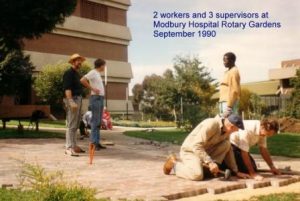 During early 1990 a long-term hands-on project was conceived which would have distinct benefit for the community and which would hopefully capture the imagination of current and potential members. In conjunction with Modbury Hospital administration a proposal was drafted to develop an area between the main hospital building and the adjacent accommodation building as a relaxation area for resident patients and hospital staff. 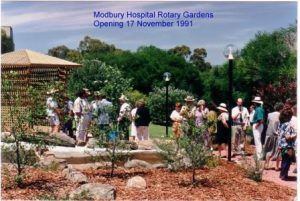 Former member, Ben Loveday, drew up architect’s plans for the development which were approved. A multi-staged project conducted over possibly two years with full member participation was initially envisaged. Many club rosters for work on the Modbury Hospital Garden area were very well attended and great progress was made on the development of this delightful area. The fellowship flowing from this type of physical activity and mutual support was outstanding. 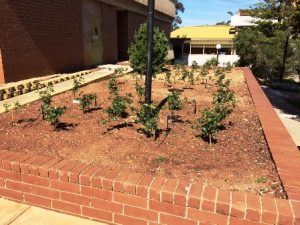 The Modbury Rotary Gardens were officially opened by Deputy Premier and Minister for Health, Hon. Don Hopgood at a ceremony in front of about 80 dignitaries and guests on Sunday 17th November, 1991.

In November 1988 club members undertook maintenance of the garden furniture. The club returned to the Modbury Hospital Rotary Garden for two weekends in February and March 2002, to prune, mulch and introduce new plants. This garden continues to be used and enjoyed by staff, patients and visitors for ten years.

In June 2015 the club purchased and donated 54 two-year old roses which were planted in a specially prepared garden area. This has been an outstanding project which has engaged the imagination and support of all members over a period of 25 years.