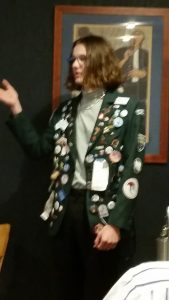 Isaac clearly had a fabulous time and was able to see much of Europe whilst studying and trying to learn the language. Isaac travelled from Norway up to the Arctic Circle, saw the Northern lights and visited Santa in Lapland. He travelled South to Austria, Germany and Switzerland to name a few. He crossed ice covered rivers and tried swimming in a near frozen stream. His ice skating and skiing skills were improved from living in snow covered areas through the winter.

A camaraderie was built up with children of host families and with other Rotary exchangees from around the world. Friendships that will follow throughout his life.

Isaacs jacket provided by the club was fully covered in badges collected along the way. If he wore it on the way home he would have set the alarms off at all the airports he passed through. In his luggage it would have taken up a lot of his weight allowance. A wonderful memento to go with all his memories.

Isaac certainly made good use of his time away and was grateful to the Club for its sponsorship and for Keith Rendell his Mentor. 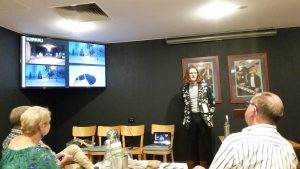