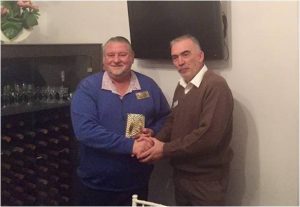 It was pleasure welcoming new District Governor Peter Schaefer along  with Group 6 – Assistant Governor Peter Perkins to the dinner meeting on 11/07/17.  As a member of Alice Springs Rotary, Peter is the first District Governor to be chosen from the Clubs in Central Australia.  After a brief introduction about his background and family, DG Peter Schaefer outlined and talked about his vision & goals for the rotary year.

As encapsulated in the rotary theme for the year 2017-18, Peter has vowed to make the difference to the lives of others in his rotary year. His goals and vision includes improving cohesive relationship between clubs and the district, encouraging Clubs to take up environmental projects, such as tree planting at Calperum Station in the district, increasing membership for the clubs and the district, encouraging Rotarians to engage in voluntary projects than purely focusing on club meeting attendance, encouraging clubs to involve regularly in International projects. He also briefly mentioned about the amalgamation of two districts (9500 & 9520) which is happening in 3 years time, by 2020 and his involvement in this project.

He also talked about another great initiative/project from Rotary clubs in Alice Springs area- “ END TRACHOMA BY 2020” in remote indigenous communities. Trachoma is an infection caused by a  microbe which causes chronic inflammation of the external lining of the eye and eyelids. If left untreated trachoma can cause blindness. Australia is the only developed country in the world where Trachoma is still endemic and largely prevalent in our remote communities. Trachoma is associated with poor hygiene, overcrowded housing, inadequate public health infrastructure, water supplies and sanitation. To prevent blindness, Trachoma needs to be treated in its early stages. Treatment becomes increasingly complex with reduced success rates in the more advanced stages of the disease. Every year for the past many years, the three Rotary Clubs of Alice Springs have actively involved in educating communities about this issue, but this year they have taken a bold step with vision to fund raise for the Fred Hollows Foundation to be able to deliver safe programs that will end the occurrence of Trachoma in our remote communities by 2020. Clubs are encouraged to be part of fund raising and donations towards this great cause.

Final Newsletter of the R.C. of Modbury